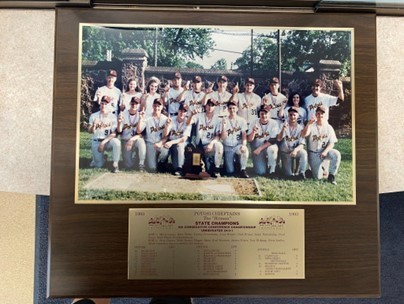 There is no doubt that Jerry Downs has quite the legacy at Potosi High School. He was once a student at Potosi; he graduated in the Class of 1969. He was a history teacher at Potosi for 42 years, and he was also an assistant baseball coach for 39 years, after his career as a player for four years. I sat down with him and talked about his years as part of the Potosi Baseball program.

From 1965-1969 he was a third baseman and a pitcher for the Chieftains. He also explained his accomplishments. He was once the MVP of the team. Mr. Downs set a Potosi school record for the highest career batting average at a little over .500 while he played. Mr. Downs clearly has a great passion for the sport of baseball. He told me how baseball was his favorite sport and it was the sport he was best at.

I found out that what made Downs want to be a coach when he responded, “baseball is my favorite sport and it was the best way to learn about the kids.” Downs became an assistant coach before the 1977 season, under the head coach Ron Kading, who also has a great legacy at Potosi. The two won 21 conference championships together and went to state five times in their nearly 40 years together. The most rewarding part for Downs was watching kids grow and improve from where they started as a freshman to where they ended up as a senior.

Criticism is something that almost every team deals with at some point in the season, whether it be from the community, parents, or even the players. During Coach Kading’s and Coach Downs’ coaching careers, Potosi was obviously very successful, so they didn’t receive much criticism. When they did, Mr. Downs explained how he would try to communicate with the kids on their level to solve the problem.

Some personal achievements Coach Downs earned included Wisconsin’s Assistant Coach of the year in 2009. He also won the 2012 Wisconsin Character and Leadership Award, not to mention all of the team awards he was a part of. His favorite memory, unsurprisingly, was in 1993 when Potosi had a fantastic season. With a record of 25-0, they won the conference championship and the state championship.

Coach Downs’ coaching career came to an end in 2017. He decided he had to leave the sport because he was missing too much of his grandkids’ young lives and the sports they played. He still is a part of the Potosi community. He teaches a class on leadership for high school students and is occasionally a game manager for some of the sporting events here. I asked if he had any regrets in his career, and he said, “I have no regrets, and I accomplished everything I wanted to accomplish.”