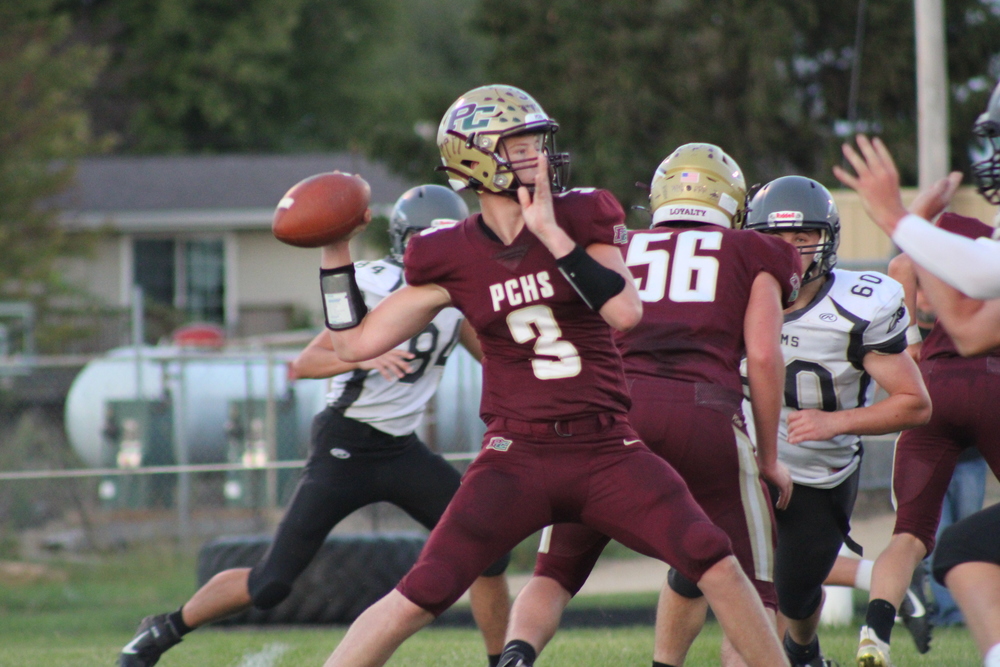 As the fall sports come to an end and winter sports are starting up, the fall all-conference lists have come out. Players are voted on by all the coaches in the conference for their performance in their sport for that season. Many players from Potosi have made it in volleyball and football. The football team had 19 all-conference mentions and the volleyball team had 2 all-conference mentions. The football team is combined with Cassville, which is counted in the 19. Potosi alone had 15 all-conference mentions. This award is something players don’t really think about as the season is going on, as they are more concerned with team commitments and success.  At the end of the season however; they can look at it and see how much hard work they put in, which gives them a sense of accomplishment.

Levi Groom, who is a senior and the starting quarterback and middle linebacker for Potosi/Cassville, got 2nd team all-conference on offense and defense . His words on making all conference are, “It’s nice to be a part of all-conference because only a select group of guys get that award. It is also nice to end my season off with an award I’ll be proud of.” This is a satisfying award for him because he can see how much he has worked for it and earned it. For Ashton Spitzack, who is a senior and the starting running back and safety for Potosi/Cassville, it is a very similar feeling. “It feels good. It’s nice to see that all of my hard work in the off season and throughout my career has paid off.”

The football team had a lot of guys achieve high all-conference honors like first team. The volleyball girls, on the other hand, only had two girls make all-conference, but one got the highest award in all-conference of any Potosi fall athlete by achieving Six Rivers all-conference player of the year. The recipient of that award was senior Kylie Reuter, who plays middle for the Potosi volleyball team. “Last year I got second team all-conference so it’s nice to see that I improved and my hard work paid off,” Reuter said.

They’re not just happy about the award, but how they earned that award. These athletes have to put in the work to achieve this award. “I worked hard all off season, working out with Mr.Siegert, which are hard and excruciating workouts. I also did routes with the receivers once a week over the summer,” Groom explains. Since Levi and Ashton lifted with each other last year, their work in the offseason didn’t differ much. “Levi and I lifted with each other every day last year, and we pushed each other to do the best we could do each and every day. That definitely helped me improve strength-wise, having Levi lift with me every day. We ran routes during the summer, which definitely helped during the season,” explains Spitzack. The things they did in the offseason definitely showed during the season as Ashton said. Levi led the Six Rivers conference in passing yards with 1541 yards, and Ashton was 5th in the conference for rushing with 839 yards. Ashton was injured during the season, so he only played 8 games, compared to 11 games played by the leading rusher in the conference.

Not every sport trains the same way during the off-season. The way people improve in certain sports to get a certain spot on the team or achieve an award is different in every sport. This is the same case with volleyball over football.Younger players play on JV and look up to the older players for advice to improve just like football. Kylie is an example of this, as she has played middle for four years and has gotten advice from coaches and older players.

Working hard all season, off season, and throughout an athlete's career can’t be achieved alone. They need support from parents, friends, teammates, and coaches to do this, which would help that athlete reach all-conference status. Levi described what his biggest supporters did to help him: “Ashton and I were lifting partners when we lifted with Coach Siegert. Ashton encouraged me during my bigger lifts, and helped lighten the moods on the days I didn’t want to lift because it felt like a grind, but we stuck to it. My parents helped me by always pushing me to improve every year. My teammates also had my back if I made a mistake and encouraged me, which helped with my confidence and my composure on the field.” Levi didn’t just have support during the season, but in the off-season too. This was very similar with Ashton. “My teammates and family supported me a lot during the season and off-season. They pushed me to be the best I could be and give everything I got on the field.”

Most likely, every sport is going to have the same type of people who support the players like family, friends, coaches, and teammates. That’s just something that won’t change, but how that support affects how they play and how they train is different. Kylie describes it as, “My family supported me at every single game, which definitely made me happier on the court and made me focus more. My coaches helped me by giving me tips on what I could be doing better and driving me to get better. My teammates were always there for me if I made a mistake and encouraged me. When my peers came to the games, it was exciting because they always made a ton of noise and made the game have a great atmosphere. That just electrified me to play better, because I knew my teammates or I would make a big play, the gym would erupt.”