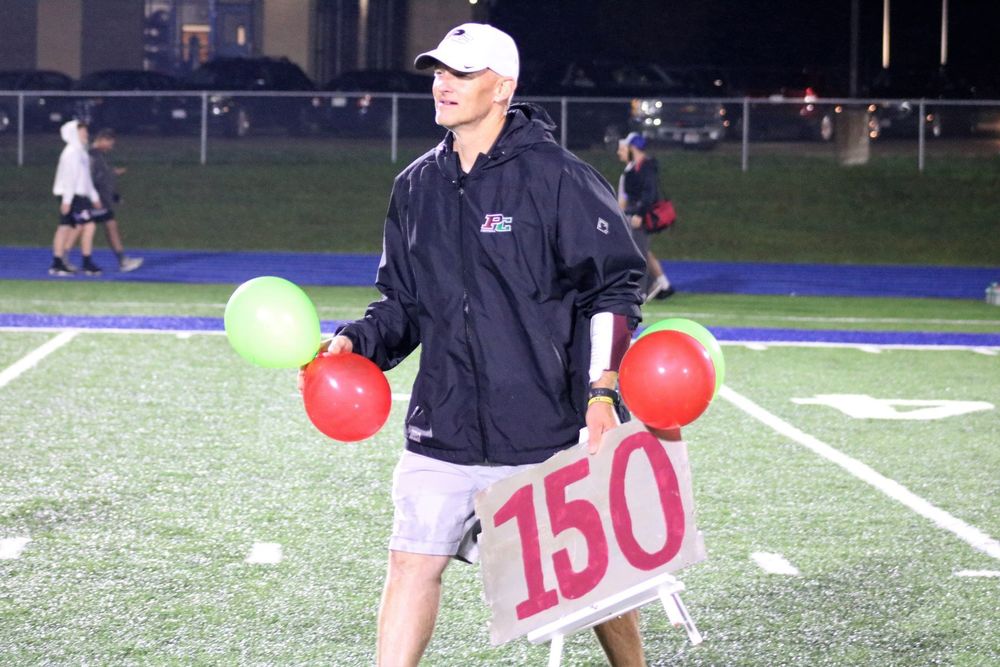 In the course of Mr. Siegert's 23 year football coaching career, there have been many ups and downs, but the 2021 football season has been a special one. Coach Siegert set the tone for the night during the Potosi-Cassville versus Southwestern game when he received the news that it was his 150th win at Potosi.

Mr. Siegert stated, “I think the football season has gone well.” He is happy with how the offense and defense play together, but he states, “I think championships and football are decided with defense; to have a good team, you have to have a good defense, but teams don’t win if they don’t score.”

Mr. Siegert is very happy with the young men he has coached this year. He stated, “they assume they're great, and they have handled adversity well. It's a fun group to work with honestly. There are always challenges every team has, but this is a really fun team. I would rank this one up there with any of the teams I have coached in the past.”

Mr. Siegert has always been humble about his wins and has encouraged his players to play the best they can. When asked about his 150th win, he stated, “it was a great achievement, but that is not what the game is about and does not speak for how well the [current] team plays.”

During Siegert's coaching career, there have been some bad years caused by COVID-19 and not being able to play or practice. Mr.Siegert stated, ¨Lucky [this year has not been] as bad as last year, but it still affects everyone. It hit the JV harder than the varsity, knock on wood, it would be a crazy time to hit us now because of playoffs, but you're always holding your breath, because if something were to happen or we would have to shut down, there is always that feeling of impending doom that I can't get used to. It's one thing where you go into a game and someone gets hurt; unfortunately it is part of the thing, but this whole COVID thing, there is no prep work for that.¨

There is always an end to a high school kid’s football career, and Mr. Siegert stated, ¨ It's just a part of high school football. Every year people graduate, and we have to find people to fill in their spot, and in the end, it's all a cycle. It's good and bad, because sometimes you lose some awesome people. At the same time, awesome people are working hard behind them, and it's their turn to prove their part of this legacy. It's all part of it, and there are good things about it and there are bad things about it. Nobody should be playing high school football in their 20s because there is a time to move on for everybody, but it also sucks sometimes, but it's a part of life.¨  Every football team has big obstacles, and Mr. Siegert states, “Well, obviously Black Hawk Warren has been a thorn in our side for the last five years. We have been beaten seven times, so obviously those guys have been a thorn in our side, but we try to keep it one game at a time.¨

Potosi Schools is proud to have an amazing coach who has led us to many victories. Here is to many more Friday night lights.