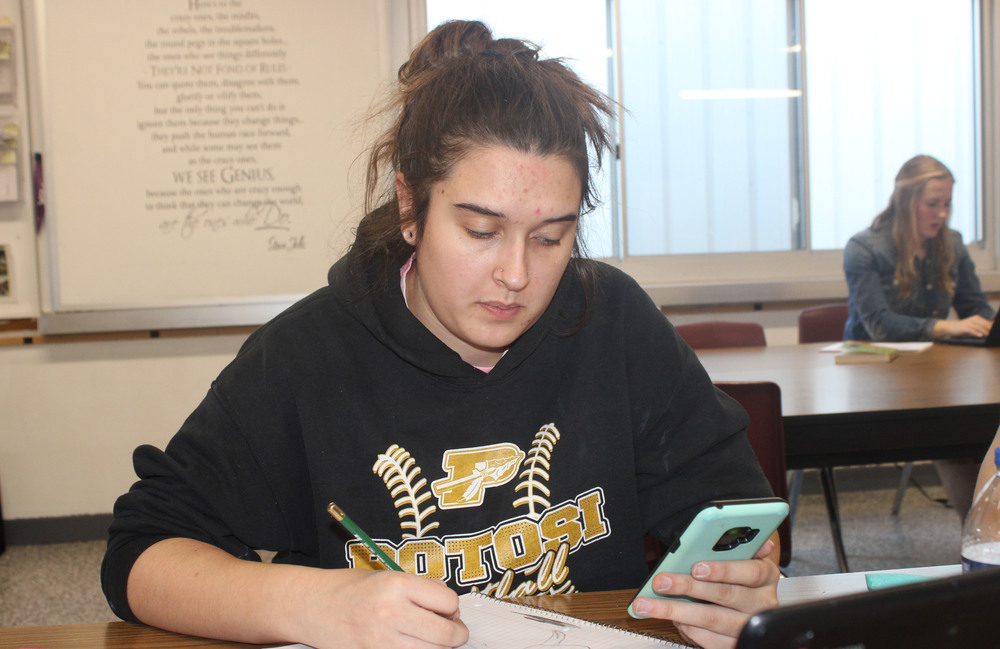 As the first semester comes to an end the Potosi seniors will have to say goodbye to three of their classmates. I had a conversation with one of my classmates, Angela Udelhoven, who has decided to take on the adventures of life by graduating from high school early. Here is her story. It all began halfway through her junior year when she found out that she could graduate early. I asked her what extra steps she had to take to graduate early. “You have to maintain an A, B, or C, in every class, in order to graduate early. You also have to take half of your senior classes during the second semester of your junior year, then the rest of your senior classes the first semester of your senior year. This was easy for Angela because she is ready to take on the responsibilities of being an adult and taking on the world. “I don’t like the school environment, so when the option to leave early came, I took it.” Angela said.

Angela is a little worried about leaving early because, although being an adult sounds like fun, there is a lot of responsibility and it can be scary. She plans on moving out of her parents' house in the next two years, and in the time she remains under their roof, she will maintain a job to save money to pay off her vehicle and save to rent an apartment. She is also planning on attending Southwest Tech for Farm Management in the fall.

Once she is on her own she will have to think about rent, food, insurance, etc. There are many expenses that she will have to cover that her parents had previously covered for her. It will be vital that she can budget her money and plan for unexpected emergencies. I asked her if she felt ready to be an adult with responsibilities. “No, because it’s a whole different thing, you have to do everything by yourself.”

Even though graduating early is scary, being a classmate of Angela’s I know that if she can make it through four years of high school, she make it through the struggles of life. Angela is a strong independent woman and like Hannah Montanna said, “everybody makes mistakes, everybody has those days, everybody knows what, what I’m talking about, everybody gets that way.”  Angela is looking forward to the next phase of her life, whatever it may bring.