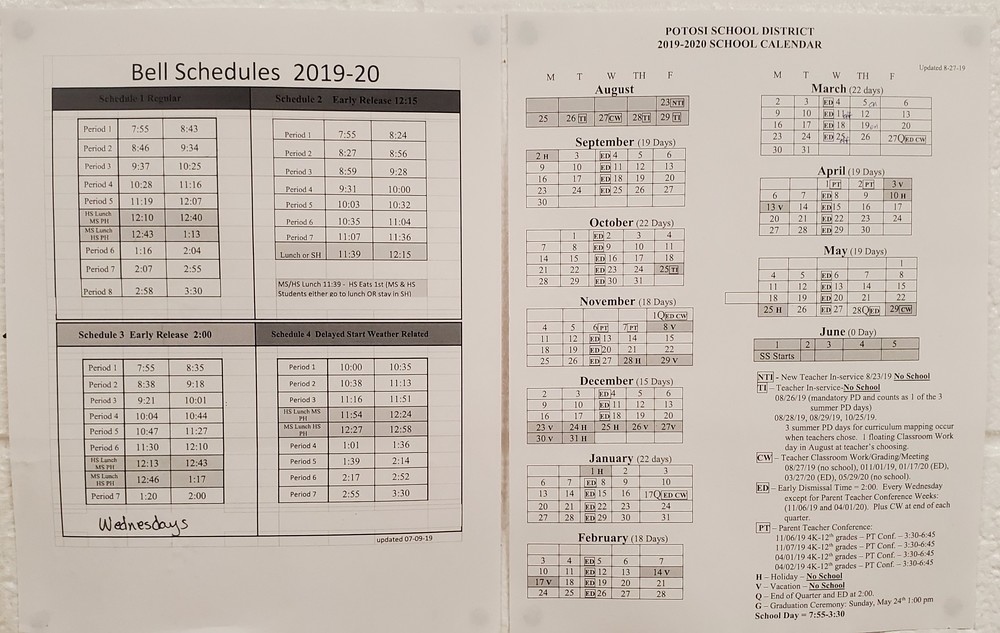 Have you ever wondered what goes into making the schedule for an entire school year? I sat down with Potosi Schools Superintendent Mr. Kurt Cohen to ask him some questions about how he handles this difficult task. Mr. Cohen explained a lot of the plans that are going to be taking in the next school year, including the standard contract for the teachers, which requires them to have 180 face-to-face days with the students. He also explained that “The state of Wisconsin no longer says how many days we have to be here; it all depends on the hours now.”

The state of Wisconsin has set a requirement of 1,137 instructional hours. The schedule that has been developed by Mr. Cohen and approved by the board for 180 school days was planned very strategically, taking into account weather delays or cancellations, so that there is a larger cushion of 49 hours over the state requirement, just in case they ever need to be used. The new calendar will still include the Wednesday early releases. Mr. Cohen added, “Teachers found it a lot nicer meeting consistently every week to work on some of the things they need to work on, instead of doing it one time a month.”

The only change to the Wednesday early release is a 1:30 PM release time, compared to the current 2:00 PM release time. Always thinking about the students, Mr. Cohen has decided to add one Friday a month during the winter months as a personal day for the students and teachers. Mr. Cohen explained, “Especially during the winter months, it can get kind of long, and it’s nice to have one 3-day weekend out of the month.”

As far as the school days for next year, classes will still start at 7:55 and get out at 3:30, and that is a big reason why there is a 49 hour cushion. Even though an extra 10 minutes added on to the school day doesn’t seem like a lot, it starts to add up over the school year, and is also part of why we are allowed a 1:30 release on Wednesdays instead of a 2:00 release.