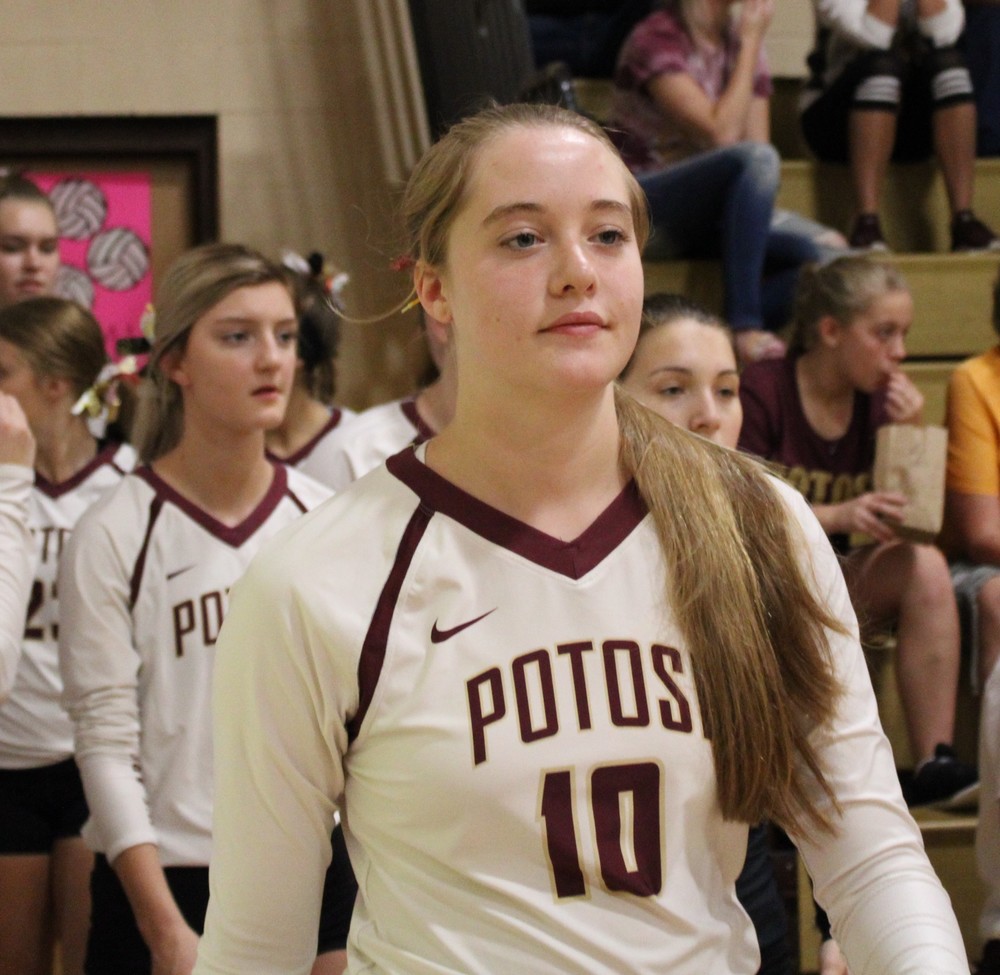 Chloe Groom is a senior, one of three on the volleyball team. She was home schooled up until her freshman year, where us folks at Potosi high school were fortunate enough to have her. She was a little blessing to the class of 2020, shy, polite, funny, and smart. Just what we needed. Some people thought she was mute for the first year, but slowly she broke out of her shell and now she will talk your ear off.

During an interview with Chloe, I got to listen to her story as she answered questions about her volleyball career and her comeback story. It is as follows: Freshman year was hard for her. “I hated it at first; I wanted to quit.” Can you blame her? A new school with new teammates. When it came time for the first game she was scared, because there was “just a lot of new stuff,” and excited, even though, “I’m pretty sure I didn’t play very much.” With some strong-willed sophomore players ahead of her, she learned from them and got better every day. Of course, having Avarie by her side sure did help! “She was like my rock that year. I had some troubling times, but Avarie was always there to help me. Then she quit and I was really mad, because I definitely could’ve used her help junior year.”

Building relationships is a big part of sports because you should feel comfortable with who you are playing with so that you can play as yourself and play fearlessly, which is why her first two volleyball seasons were so important; it took time to build those relationships. For Chloe, it took until basketball season her freshman year to feel comfortable with the girls around her. “[Sophomore year] volleyball season there were new freshmen, and I was kinda scared of Syd.” It took some time to adjust again.

Chloe’s third season wasn’t a step forward like her first two seasons were. During her junior season, she rarely got to experience playing time in varsity games. “At first I thought it would be pretty decent, but it kinda went downhill.” She was grinding it out everyday at practice and getting better, “but you’ve gotta learn from it! That’s all I’ve got to say about that.”

Chloe’s favorite year was “probably this one; we did all of the summer [working out and practicing] and all of the memories we’ve made. You build very good relationships when you have to run together.” Chloe was a huge asset to our team. “I’m getting to play quite a bit.” She plays all the way around on the court. As an amazing leader, she is constantly making others around her better by giving her all and encouraging everyone when she is on and off the court.

This year has been an eye-opener for me as a teammate of Chloe. The way she leads and the amount of determination to succeed that she has is truly inspiring. I asked Chloe what volleyball has taught her about herself. “About myself? Well, I could’ve quit, but I didn’t, so I guess I have a little bit of perseverance.” Chloe stuck it out and it worked well for her; she practiced to get better, not to be the best. She worked out because she knew it would help her, not because she had to.

Chloe has developed into a leader, a great teammate, and a very important part of the team!